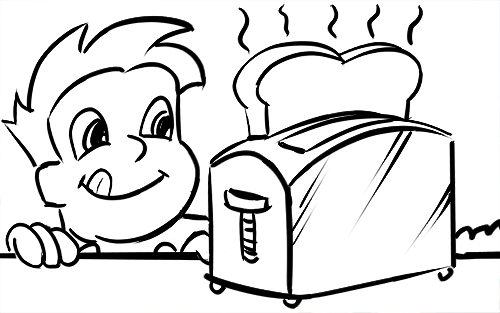 I know, you think I’m on a culinary kick here, but just bear with me.

Not just to decide on white, wheat or rye? Or what spread – butter, Jelly, or the delightfully-delish, calorie packed Nuttella?

But have really thought about Toast?

After all just about everybody has or has had a Toaster. An appliance whose sole purpose is to cook already cooked food and yet it’s usually only eaten at breakfast and half the time it’s not even finished.

What about the tons of flour, made from acres of wheat? Or the thousands of people who made your two slices happen? Not just the farmers mind you, but the industries that provide the yeast, the packaging, the ovens, the hair nets!?

And speaking of hairnets, Maria Alverez has worn a different hairnet for twenty years while working at Wonderbread. If I had a dollar for every hairnet she wore I’d have $7,300 dollars and she is just one worker at one Wonderbread bakery! Does Maria even eat toast or does she always go tortilla?

And tortillas? Are they a large challenge to the market share of bread and thus it’s child, Toast?

What about Melba? Who is she and why is her Toast so special that it’s packaged and on your grocery store shelf? What’s keeping Emeril, Puck and Paul Newman (I know he’s dead but his company lives on) from packaging Toast and selling for $12 in the freezer at Whole Foods?

How did Russia deal with no Toast during the Russian Wheat Shortage of the 1970’s or was that information perpetrated by our government in order to promote a fear of Communism in order to boost our taxes so that the Military Industrial Complex could profit?

And who invented Toast anyway? Was some cave man pulling the crusts of his Peanut Butter and Jelly Sandwich when he got attacked by a sabertooth tiger, dropped his sandwich on a scorching hot rock, where, it cooked a crispy crust on one side, and then was salvaged by his brother/father, Bog, who, feeling a bit hungry himself, ate the half toasted sandwich, and, sitting his naked ass on another hot rock, put two and two together as he licked the jelly from his fur covered hands?

What about the fact that along with juice, milk and a bowl of Trix, Toast is a part of a complete breakfast?

And why oh why do we not eat it at the other meals?

Sure you can get your Subway Sandwich toasted but you know that the teen/twenty something behind the counter has to ask, “Toasted or not?” because your focused on whether or not to blow your diet and top it off with extra cheese and sauce.

And dinner? Forget it. That’s Roll territory. “Fresh Baked Rolls” get all the hoop-la yet they are only cooked once and no kitchen on planet Earth has an appliance JUST to cook rolls now do they? Yet Toast is not even a consideration on the dinner table!

Think about something more important.

I mean reeeaaallly think about it.